This past weekend was the Triple Bypass bike ride. The ride is located in the heart of the rocky mountains, spanning 120 miles and navigating 3 mountain passes, Juniper,  Loveland and Vail. The total elevation gain is around 11,000 feet. Don’t ask me how we convinced ourselves to sign up for this event, I guess we decided the odds were against us since getting in required being selected in a lottery process. Turns out the lottery system is faulty, we weren’t supposed to be selected.

When we got the email containing the “good” news I was pretty excited about the event. As the event approached I started to feel very overwhelmed as did my riding partner Doug Las. We had gone from a very good cycling regiment to a lesser beer drinking and nacho eating one. Needless to say, we weren’t in the shape that would make this ride easy, although I think only an elite group thinks a ride like this is easy. Regardless of our shape, Doug and I would make the most out of this ride and be MEN the entire time! Well, minus all the tears we would be MEN! 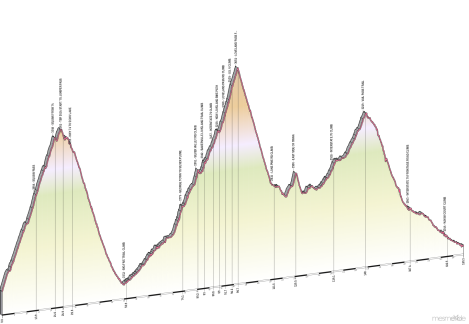 With the ride being on a Saturday, Doug, Mal and I decided to head up on Thursday and stay the night in Denver before heading over to Beaver Creek for the remainder of our vacation. One great aspect of the ride is the discount you get at the local resort that sponsors the event (“sponsors” might not be the correct term).  We were able to get a two bedroom condo for about the same price as the smaller one room hotel in Denver, it didn’t hurt that we were upgraded as well! We got to Beaver Creek in the late afternoon on Friday and ate some pasta in the village at a small pizza joint. We hit the sack pretty early to get as much sleep as possible before we got on the bus to take us to Evergreen at 4:15 in the morning. Besides the guy who peed in his water bottle, the ride over was pretty uneventful. Thanks for taking one for the team pee guy! We arrived in Evergreen at the start of the event around 6:30 AM. I should have taken a picture of the insane crowd of people about to embark on a full day of riding their bikes.

The ride immediately starts going uphill towards Juniper Pass at an elevation of 11,140 feet. The gradient of the climb never got overwhelming and we were able to keep a pretty good pace up. We made one stop to snap some pictures, mostly because I dropped my phone shattering the back of it. That will teach me to try and take pictures while riding uphill and dodging people. The views from this road were absolutely amazing giving you peaks of the Denver area as well as the massive mountains in the distance. 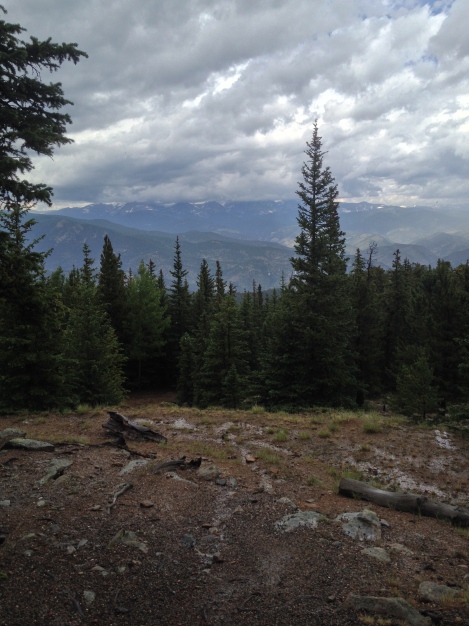 A lookout near Squaw Pass

As we made our way to the pass it started to get cooler and cooler. In the mountains its cold in the mornings, especially at 11,000 ft. Some of my cycling friends had told me to be very careful on the first descent as it is a bit crowded and people don’t really know how to ride around others. They were not joking. Mix 3,700 cyclist of varying skill levels on a fast and winding descent and you have one giant mess! This descent definitely required a good amount of attention and caution. Saw one extremely close call in a hairpin, but everyone made their way down. Next was a long false flat leading you to the start of Loveland pass.

One of the main reasons I like doing longer rides in these organized events is the availability of aide stations. When you are doing a longer ride by yourself you have to cram a ton of food in your pockets or make a bunch of stops at gas stations. Its nice to be able to not worry too much about food and water. As we made our way up to Loveland pass we stopped at the A-basin aide station. This was the most disorganized aide station I have ever seen. The line for water took about 25 minutes and when we made it to the front there was one water dispenser. Doug and I filled up our water, took a look at the line for food that was about 4 times longer and decided to get the heck out of there and head to the next aide station.The rest of the ride up to the pass consisted of a bunch of switchbacks and snowbanks. When we got to the top we took some pictures and made a silly music video, you can watch it here. 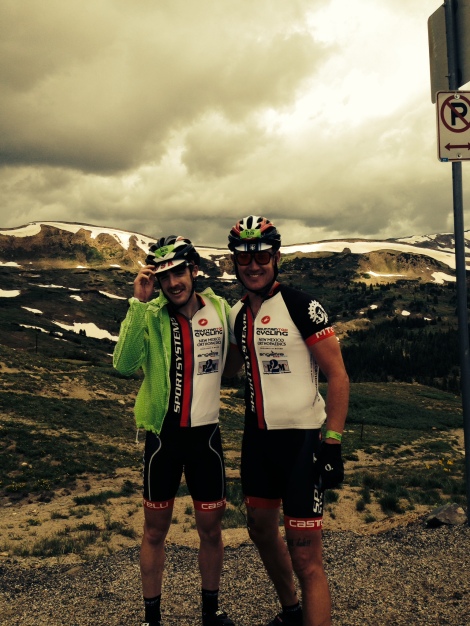 Doug and I at the top of Loveland Pass 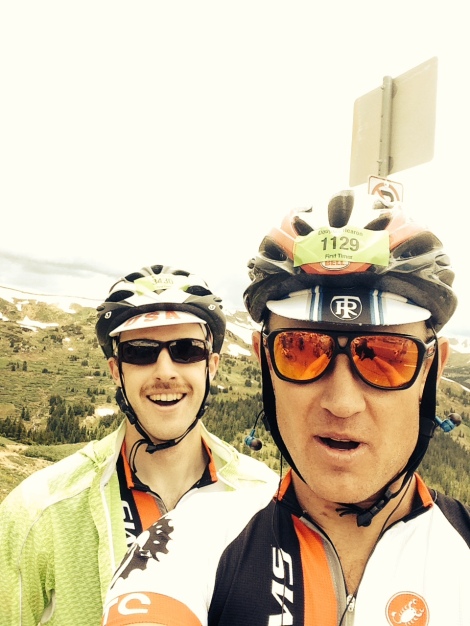 Without becoming too repetitive, we descended down Loveland pass in some pretty heavy rain. Rumor was the rain turned to hail later in the day, I am glad we weren’t there to confirm it. This was one of the best descents I have ever done, fast with good corners on a very well paved road. You can see some of the turns in the before mentioned video.

You guessed it, after the descent we started up another climb to tackle Vail pass. The majority of this climb was done on over crowded bike paths, but the scenery was amazing with a river never too far away. After the pass you start the long descent into Avon. Descending on these bike paths can be quite technical with their sharp and blind turns. By this point you are either exhausted, suffering from some serious saddle sores or both. Doug and I made our way to the finish line in Avon when this guy passed us. I heard Doug yell “GET HIM!” so I opened up a little sprint into the finish to catch him and raise my hands in excitement to GET OFF MY BIKE!

This finish area had a ton of different things going on, but one thing concerned Doug and I… Food and BEER! Lucky for us, my awesome wife quickly got in the beer line while we got food. We were greeted with beers as we sat down to eat in the shade of a large tent. We made some friends with a couple locals from Aspen as we pigged out in front of them and yelled about of much fun we had, in hindsight at least.

The party didn’t stop there. We hit the town that night in celebration of the accomplishment, probably had a little too much fun! The next day was full of pampering ourselves and working on our tans at the pool. We made another fun video that can be seen here. 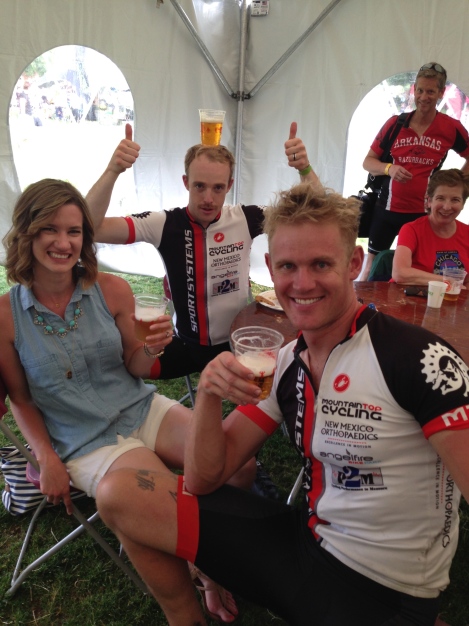 Enjoying a beer after the Triple Bypass

If you enjoy cycling, I would encourage you to do this event/ride. It takes a lot of effort and a very good base, but the reward of a sore neck, tan lines and a little bit of bragging rights is worth it. Once you’ve ridden it, I’ll let you make the call on doing it again. For the record, I won’t 😉

Here is a link to my ride data: http://www.strava.com/activities/165809111. For some reason the Garmin 510 lost communication with my heart rate monitor and power meter half way through the ride. Pretty disappointing, but what can you do! I guess I could start my own cycling GPS company to give Garmin some competition so they make better units. Thanks for reading and I will leave you with this fun picture of us at the pool and an encouraging sign along the ride!