This past weekend I took a trip to the Conejos River valley to get some fishing in. I had been planning a backpacking trip to the Gunnison Gorge for months with hopes of stoneflies and large trout, but the snow pack, thus run off, was a little too good this year. Instead, we opted for a trip to the Conejos River. It is a beautiful area with many options for fishing, hiking and camping. As fishing has always been my major concern, I have ventured into many parts of the Conejos region including: Bear Lake, Tabacco Lake, Elk Creek, Lake Fork and Adam’s Fork. This is really only the surface of fishing in the basin. Last weekend though, we fished one of the larger tributaries to the main river.

The original plan was to head out mid-day Thursday to the camping area, but some late cancellations from half the group made us rethink our strategy. (One gentlemen is excused as he was moving the following weekend – the other will never be forgiven) Instead, we decided to leave on Friday morning. We knew that there was a strong possibility of gusty winds in the afternoon so we wanted to get out as early as possible. I woke up in the morning and drove in the opposite direction of fishing to my buddy’s house. After a quick drink of some fancy coffee we hit the road with his two dogs in the back! From ABQ the ride is pretty straight forward with a little detour in Santa Fe. Once you cross over the Colorado border you hang a left in Antonito and head to CR250. We made a quick stop at Conejos River Anglers in Mogote, http://www.conejosriveranglers.com/. The shop recently changed owners so we wanted to see how it was doing, oh and my buddy didn’t hold up his end of the bargain of buying a license online to save some time. Shop seemed to be in good shape, but only time will tell how these gentlemen do business! The shop did have a real life stonefly on the counter, which made me pretty optimistic of how the fishing was going to be. We headed out of the store and drove up the road to the fishing location.

Now here is a little bit of a disclaimer, fisherman don’t give away their beloved places, so please understand when I don’t tell you where we went! However, I will give you some hints and if you are familiar with the area you’ll probably figure it out. When we got to the tributary we unloaded our gear and rigged up our fly rods. The hike to the area we wanted to fish was only a few miles up the path. The stream offers some canyon and meadow fishing. I generally prefer the more rugged fishing in canyons with tight pockets, slicks and deep runs, but I guess this day we were feeling a little less involved and opted for the leisurely fishing of the meadows. By leisurely I mean easy to navigate, not easy to fish.

A view of the meadow from the trail

It is a well known fact that when you fish in an area that sees above average pressure that the fish become spooky and more evasive. This meadow is no exception to the rule. There are rumors of fish larger than 20 inches being caught here and having to crawl on the ground to get to your spot is a must. Its probably the first fact that draws most people to this area and the second that limits most peoples experience. With that being said, I knew the odds were against me for having a “successful” day fishing in the meadows, but that’s not why I went there. If you go fishing to catch trophies or numbers of fish you are seriously limiting yourself. The true goal of fishing isn’t fishing at all. You go to get outside, to take a break from work, to clear your mind, to work on your sock tan, to bask in the stress relief that IS nature – this list can go on and on. I will preach this for as long as I live, especially after a trip where I only catch one fish! The meadows kicked our butts! I was seriously under gunned with the fly rod I brought, and fish didn’t seem to be too keen on two hunting dogs running around doing what they are supposed to do. The problem with hunting dogs when you go fishing is that you aren’t hunting. You work on getting these dogs to run amok throughout the year and then you take them fishing and want them to do the exact opposite of what you’ve been teaching them. I did have fun watching them chase birds back and forth and get some lite swimming in, but they surely didn’t help the fishing.

Ava, a German wirehaired pointer, on the look out for flying objects

The stream running through the meadow was amazing. It had deep smooth turns with undercut banks, the ideal place for fish to get old and wise. We had hoped to be lucky and get there after run-off, but we were probably a week or two early. The water was still pretty high and cold, but nothing too overwhelming. After working through the meadows we got into some faster water, but the higher flows made it pretty difficult to fish. We gave it a shot for a few minutes, then turned around to give the meadows one more chance as we started our hike back down the trail. As we walked back towards the hole that we wanted to spend some time fishing, I noticed a few fish in a small break off of the main stream. I approached carefully and readied my fly. I made one cast into the pool and saw numerous trout making a beeline to what they thought was an easy meal. The majority of the fish in there were pretty small, but there was one trout a little bigger than the others and it turned out to be a little faster too. I saw him fly out from under the bank and take my fly! The beauty of fishing a 3 wt fly rod is that the smallest of fish can make a memorable fight. Once I brought him to shore I was shocked to see that it was a brook trout. These are pretty common in the area, but usually a little higher up in the drainage. Previously, all we had caught on this stream were brown trout, so I was pleasantly surprised with a new species for the stream.

Showing off my prize catch to the dogs 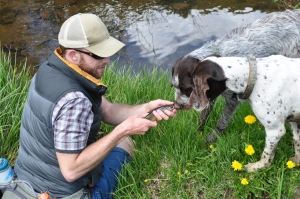 After giving a couple spots in the meadows another try we got back on the path and headed back to base camp. The dogs were still going back and forth taking in all the smells there were to offer. We did run into a nice group of 3 brothers who were probably in their sixties heading out for a 7 day backpacking trip in the alpine wilderness. Gives me hope I’ll never have to give up this awesome hobby. Once we made it back to the camp/trailhead we set up our tents and cooked dinner to the beautiful hum of gas generators. I guess we aren’t the only people who know of the area. The next morning we woke to a strong wind and decided to call off the trip a little early. At least we were able to spend a day in the mountains!!

Here are a few more pics of from the trip!

A view from a flower’s perspective 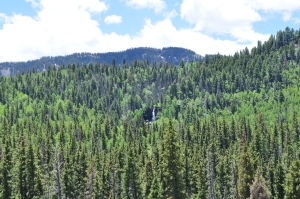 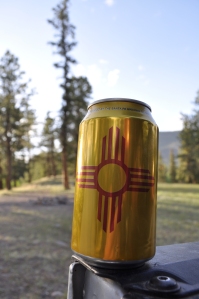